Late Msgr. John Weidner SAC, was the First Apostolic Administrator of the Diocese of Raipur. He was born on 17 February 1918 in Germany. He served in World War II from 1935 to 1945. He was ordained a Priest in 1949. He was Councillor and Secretary General of the Society of the Catholic Apostolate in Germany from 1953 to 1959. Thereafter he came to India and was the Superior of the Pallottines in India from 1959 to 1964. From the year 1964 to 1974 he served as the Prefect Apostolic of Raipur and in 1974 he was appointed the Apostolic Administrator of Raipur.

He was a zealous missionary and far sighted visionary. He built many Churches in different parts of Chhattisgarh. He has contributed to the social change of Chhattisgarh by establishing many Schools both in Hindi and English media. He contributed to the welfare of the people of Chhattisgarh by constructing many hospitals and dispensaries. He ran many humanitarian works like food for work, mother and child schemes. He worked incessantly for the upliftment of the downtrodden. He began crèches, orphanages and old age homes. The areas of missionary works were Raipur, Bilaspur, Durg, Rajnandgaon, Mahasamund, Janjgir – Champa, Korba and Dhamtari in a special way.

He made India his home and went for his eternal reward on 17 August 1974. 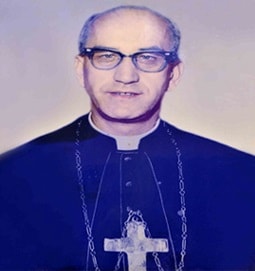